About Us - Our Community - New Westminster 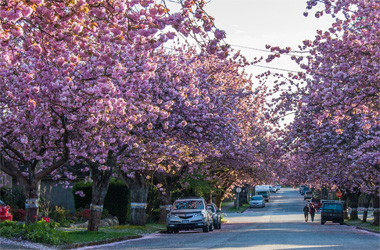 A Great Place to Study and Live

New Westminster is a safe, pleasant place to live and study. Often called a small town within a big city, it is part of Greater Vancouver and the Lower Mainland of British Columbia. Located only 25 minutes from Vancouver International Airport by car and 25 minutes from downtown Vancouver by Skytrain. New Westminster is conveniently accessible by two train lines and six stations as well as numerous bus routes which make getting around simple.

New Westminster was founded as the capital of the new-born Colony of British Columbia in 1858 and continued in that role until the Mainland and Island Colonies were merged in 1866. New Westminster is located on the right bank of the mighty Fraser River, one of the main River Arteries in Western Canada.

Many international students reside with host families in the historic and notable heritage neighborhood of Queens Park. Modernized stately homes with heritage designation line streets with names such as Royal Avenue and Queens Court. Known also as “The Royal City”, New Westminster still honours its roots with annual festivals and customs dating back more than a century.

New Westminster has evolved into a modern 21st century city connected to the world by its diverse population, modern educational institutions and businesses which thrive on the international nature of a Pacific Rim country.

Are you interested in knowing more about the world’s largest Tin Soldier, New Westminster Quay (waterfront market) or the city’s annual Hyack Festival?

New Westminster boasts a variety of modern public facilities for citizens and visitors to the city to use. Whether you are interested in swimming, curling, baseball or gymnastics, just to mention a few there is something for everyone in New Westminster. New Westminster features ice skating rinks, indoor and outdoor swimming pools, gymnasiums as well as all- weather fields to be used by sports teams and individuals. The New Westminster Youth centre located in Moody park (a short walk from New Westminster Secondary School) is an outstanding facility with youth targeted programs and equipment for students to use for study, sports and fun.

If you are looking to borrow the latest best seller, a place to study or research your latest report for school the New Westminster Public Library is the place to go. Students can apply for a library card to borrow books and materials at libraries throughout the lower mainland. Visit the web site for hours of operation as well as what is required to apply for your card.

The City of New Westminster is one of the most progressive growing cities in British Columbia. If you want to know more about our dynamic city as look no further than the web site below. There is a vast array of helpful information categorized for convenient use. Whether you are a resident, a visitor, or a member of the business community you will find what you are looking for at this site.

Welcome Back to School!

We extend our greetings to all students and families who will soon be heading back to school or beginning school on September 6th. Please view Superintendent Hachilaf's Welcome Back to School Message here. more

We are looking forward to welcoming our new students to New Westminster in the next few weeks.  Students can now join us on MS Teams with the log in and arrival information received in the first week of July. If you have not already, please send us your arrival flight details.  We look forward to seeing you soon! more

Become a host Family for an International Student

The New Westminster School District International Education Program is looking for new host families for students attending in September 2022.
To be a homestay family, you need to be able to provide... more